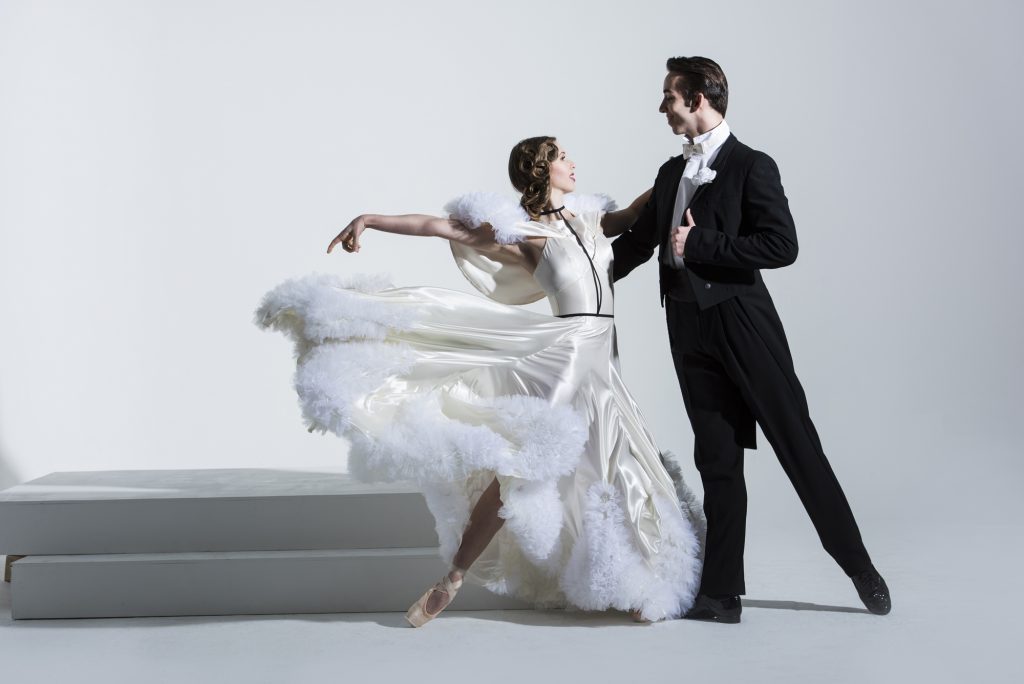 January, 2018 – TULSA, OK – Tulsa Ballet is proud to present the North American Premiere of Strictly Gershwin at the Tulsa Performing Arts Center February 9-11, 2018. This epic Broadway type Ballet is a tribute to the classic American music of George and Ira Gershwin and will transport audiences to the golden age of Hollywood.  The production is the largest work Tulsa Ballet has ever produced, as it requires about 38 dancers, a dozen tap dancers, plus four singers and even roller skaters, all sharing the stage with an orchestra of about 50 musicians.  For the upcoming performances, the Tulsa Symphony Orchestra will be under the baton of revered West End conductor and musical director for this production, Gareth Valentine, who ignites the podium with his raw energy and passion for the music.

Strictly Gershwin is the distilled essence of America during the first part of the 20th century.  It summarizes and encompasses the greatest contributions this country has made to the fields of music and dance, and the beginning of the worldwide phenomenon we now know as musical theater.  Artistic Director Marcello Angelini says, “Growing up in Italy I was mesmerized by the Fred Astaire and Ginger Rogers movies, by Gene Kelly and all the big band music that was part of that era.  While missing much of the dialogue when watching black and white movies (I didn’t speak English at the time), the music, dance, and visuals would keep me nailed to the TV screen for hours. George Gershwin’s music, and the dance style that emerged during that period, not only represent the artistic and innovative gifts of our country but also the spirit and resilience of the American people. Most of this music was composed either after World War I or during the Great Depression and yet the music and dances of the time reflect the superb optimism of the American people for greater things to come.”

For Angelini, when it comes to Derek Deane’s Strictly Gershwin, it was love at first sight.  The atmosphere created on stage by Deane for this work takes audiences back to a time when they might not have had much, but they were living life at its fullest. The joy, romance, warmth, and exuberance encompassed in the music, and visualized through the choreography, just overwhelms the senses. Strictly Gershwin is a spectacle for the eyes, a treat for the ear and a delicacy for the soul.

Originally created for the English National Ballet and conceived for the arena-like London theater, The Royal Albert Hall, this successful merger of art and entertainment has only been performed by the English National Ballet and the Queensland Ballet in Australia to date.  Tulsa Ballet will be the third company worldwide to stage it and the first company to present it for U.S. audiences.  Angelini says, “We have big shoes to fill, as Strictly Gershwin sold out the Royal Albert Hall for runs of five weeks at the time. I am sure our audience will love this dance event and that it will become a permanent fixture in our repertory.”

Strictly Gershwin combines ballet, tap dance, theater, songs, Broadway glamor and dazzling choreography to deliver a show that will get everybody dancing and singing in the theater, whether they are dance enthusiasts or first-time theatergoers.  Angelini says, “Strictly Gershwin is a show with a wide appeal and I hope will become a tradition for our country.”

More About the Choreographer

After his training at The Royal Ballet School, Derek Deane went on to join Royal Ballet Company in 1972. Deane was promoted to Soloist in 1977, Principal Dancer in 1980 and then to Senior Principal Dancer in 1982. There, Deane danced some of ballet’s most memorable roles, including Prince Siegfried in Swan Lake; Romeo, Benvolio, and Tybalt in Romeo and Juliet; and Prince Rudolf in Mayerling.

Deane worked with some of the era’s most respected choreographers, including Macmillan, Ashton, Balanchine, Van Manen, Neumeier, Tetley, Nureyev, Wright, and Bintley. After retiring from the stage, he went on to become the resident choreographer and Assistant to the Director of Teatro Del Opera Di Roma in 1990, before rising to Artistic Director of English National Ballet in 1993.

Works Deane has created for English National Ballet include Giselle, Alice in Wonderland, Swan Lake, The Sleeping Beauty, Paquita, Strictly Gershwin and Romeo and Juliet. Many of these works Deane has re-created for the hugely successful “in the round” productions for the Royal Albert Hall, including Swan Lake, seen by over 500,000 people worldwide. Deane has twice been nominated for Laurence Olivier Awards, and was awarded the OBE in Her Majesty The Queen’s New Years honours list 2000.

Tickets to Strictly Gershwin start at $25 for select performances.

3-Performance packages to Tulsa Ballet’s 2017/18 Season are available! Subscribe and save!