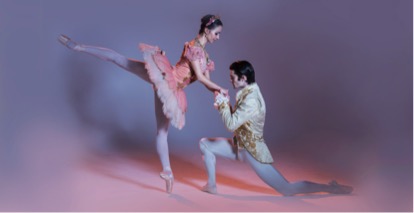 February 2018 – TULSA, OK – Tulsa Ballet will present Ben Stevenson’s Cinderella March 16-18 at the Tulsa Performing Arts Center. It has been four years since Cinderella last graced the stage in Tulsa to sold-out audiences.

As both a fairytale and full-length ballet, Cinderella has withstood the test of time because of its balance of romance and comedy, offering something for everyone in the audience. Theatergoers will enjoy the swooning love story between Cinderella and her Price Charming, as well as the hilarity between the two rotten stepsisters; scene-stealing roles that this year will be performed by Ballet Master Alfonso Martín and Company Manager Dallas Blagg, both former dancers with the company.

The lavish production follows the familiar story of Cinderella living a life of servitude under her stepmother and stepsisters but soon finding herself immersed in a magical love story. Choreographer Ben Stevenson served for nearly 30 years as Artistic Director of Houston Ballet, where he made a name for the company internationally. Stevenson has created an enviable catalogue of beloved works performed by top companies around the world, including Tulsa Ballet’s production of Dracula, which will return in October. Called, “his masterpiece,” (Salt Lake’s Deseret News) Stevenson’s Cinderella is perhaps the most widely performed of all his works.

Artistic Director Marcello Angelini says, “As a matter of process, every time I plan to do Cinderella again I start with the firm resolution to bring a new one to Tulsa.  I love Ben Stevenson’s rendition of this story but also recognize that after a few times, we might need to give space to something new. After looking at the top Cinderella productions around the world… we’re doing Ben Stevenson’s version yet again! It’s simply the best production on the market.” Angelini says Stevenson is able to blend of all of the romance and humor perfectly while keeping the story trimmed down to its core.

This year, Tulsa Ballet is proud to present two dancers in the lead role of Cinderella: Soloist Sena Hidaka and Corps de Ballet Minori Sakita. Angelini says, “Sena and Minori are very different dancers. One is endowed with the gift of non-verbal communication and the other with the gift of effortless technique and stunning, long lines. At the start of this process each of them excels in some parts of the piece, yet by the end of the rehearsal time they will both be well rounded, impactful Cinderellas.” No matter which night audiences may attend, they are guaranteed to experience well-paced storytelling, remarkable choreography, beautiful visuals, and witness some of the most talented dancers in the world today.

After a record-breaking success of the U.S. premiere of Strictly Gershwin in February, followed by an upcoming tour to The Joyce Theater in New York City, it is truly an exciting time for Tulsa Ballet. Angelini says, “Thirty-six hours after the final curtain comes down on our New York performances we will be at the Tulsa PAC with our first dress rehearsal of Cinderella.  By the end of our Cinderella run we will have engaged and entertained our local patrons while hopefully captivating and charming our New York audience.  While in New York, we will have reaffirmed that Tulsa is the creativity center of the Midwest, home to an international dance organization and a host of excellent arts and cultural institutions.”

Performances of Cinderella will be accompanied live by Tulsa Symphony Orchestra. For tickets call (918) 749–6006 or visit www.tulsaballet.org.

Tickets to Cinderella start at $25. Two-performance packages for the remainder of the 2017-18 Season are still available. Package pricing starts at $70. Subscribe and Save!