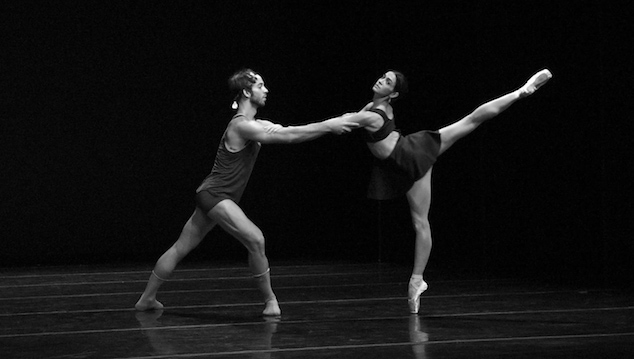 Triple Bill performance features three World Premiere creations by some of the most sought after women choreographers of the word. Beyond the Curtain features choreographers plus the Editor in Chief of Pointe Magazine, moderated by the Senior Front Page Editor of the Huffington Post

TULSA, Okla. – August 2017 – Tulsa Ballet will launch their 61st season in September with the annual celebration of new dances entitled Creations in Studio K. Tulsa audiences are the first to see brand new contemporary works by accomplished choreographers before they take a life of their own and start traveling around the globe. Tulsa Ballet Artistic Director Marcello Angelini describes the program as the most important one of the season, as it focuses on the future of dance. He says, “I always talk about searching for the right balance between tradition and innovation. Those are the yin and yang of our art form. They are both needed if we want to ensure the future of our art form, which is why Tulsa Ballet built Studio K Theater. It is the perfect space to introduce new works to our audience. It was a massive investment for a company our size but I am so happy to share it, for the eleventh time, with our audience!”

This year, Creations in Studio K will be dedicated to the power of the female voice as three female choreographers are showcased at the height of their careers. The dance makers for this year’s program are Helen Pickett, Annabelle Lopez Ochoa, and Young Soon Hue. Angelini says, “I am thrilled by the amount of inventiveness encompassed in this first program of our 61st season, one that is dedicated to the creativity, sensitivity and accomplishment of female dance makers. All three of them embody these qualities and I can’t wait to see their works take shape. I have been following Annabelle Lopez Ochoa’s growth as a choreographer for the past four or five years and found her dances increasingly more compelling and challenging. She is, according to Dance Magazine, the most sought after female dance maker in the world. Helen Pickett is a force in the field, as well as a force of nature, she has created over forty ballets during the past twelve years for companies all over the world, including Boston Ballet, Atlanta Ballet, Pennsylvania Ballet and The Scottish Ballet. As for Young Soon Hue, this will be her fourth work for Tulsa Ballet. She is based in Dusseldorf and also stages her works all over the world. I love her ability to simultaneously challenge and entertain the audience.”

Creations in Studio K opens September 15 at Tulsa Ballet’s Brookside facility with performances through September 24. Tickets start at $25 and can be purchased by calling (918) 749-6006 or online at www.tulsaballet.org.

Tulsa Ballet will host the second annual performance of Kaleidoscope: A Celebration of Local Dance on the evening of Sunday, September 24th. This special performance will feature new works by Bell House Arts, Tulsa Modern Movement, Portico Dans Theatre and Nina Madsen Dance. This performance will be free and open to the public.

BEYOND THE CURTAIN – GENDER AND DANCE

Tulsa Ballet is proud to announce the introduction of a brand new public lecture series entitled Beyond The Curtain, meant to explore topics and subjects of relevance in our art form. The very first gathering of minds will take place on Friday September 8th at 5:30pm, and will celebrate women dance makers, as well as shine a spotlight on the gender disparities female choreographers often face in the dance industry. The event will feature all three Creations in Studio K Choreographers (Helen Pickett, Annabelle Lopez Ochoa, and Young Soon Hue) as well as the Editor in Chief of Pointe Magazine Amy Brandt. The lecture will be moderated by the Senior Front Page Editor of The Huffington Post Chloe Angyal.

Tulsa Ballet Artistic Director Marcello Angelini has continued to facilitate meaningful connections between the art form of dance and audience members. He says, “Beyond the Curtain is the natural evolution in our efforts to communicate and educate our audience to the various offerings of Tulsa Ballet. I never used the word “educate” in the same sentence with “audience” before, as I believe good art doesn’t require any kind of education in order to be appreciated. I also know that our audience is one of the most educated in the country, thanks to the effort of the Jasinskis before my time and to the repertory we have been presenting for the past two decades. Yet hearing from the dance makers themselves, about the relevance of the dances we present, learning about the background of each work we stage and engaging in discussions about the importance of the works we present, has a fascinating direct effect on our audience.”

Tulsa Ballet has been offering pre-show discussions for all PAC performances for years. Beyond the Curtain is the natural evolution of those gatherings that will provide the opportunity to hear about topics closely related to the issues surrounding the art form and the cultural landscape of our country. Angelini says, “What better way to kick off this program than by opening a discussion on one of the hottest topics in the field of our time: the importance of woman choreographers and closing the gender gap. Having all three of the women choreographers in the same program will provide an introspective look into the creativity, sensitivity and accomplishment of female dance makers. I will be sitting in the front row of this lecture and I am sure I will learn a lot from these five strong and unique voices!”

Helen Pickett, a San Diego, California native, currently resides Brooklyn, New York.
This year marks 11 years for Helen as a choreographer, creating over 35 ballets in the U.S. and Europe. Since 2012, Helen has been Resident Choreographer for Atlanta Ballet. She is the WINNER of the Best Choreographer and Best Dance Production of Atlanta in 2015. In 2014, for her ballet, The Exiled, she was named Best Choreographer in Atlanta. Helen premiered her first full-length ballet, Camino Real, by Tennessee Williams in 2015. Critic Manning Harris wrote that Camino Real would “become a legend in the dance world.”

In 2005, Helen received her first choreographic commission from Boston Ballet. The New York Choreographic Institute awarded her a Fellowship Initiative Grant in 2006. In the same year and through 2008, Helen choreographed for Boston Ballet, Washington Ballet, Aspen Santa Fe Ballet, Louisville Ballet and Ballet X. In 2007, Dance Magazine named Helen one of 25 to Watch. She received a Choreographic Residency from Jacob’s Pillow in 2008. Helen was one of the first choreographers to receive the Jerome Robbins Foundation’s New Essential Works Grant.

Helen created a choreographic intensive for college-aged choreographers entitled, Choreographic Essentials, and a motivational creative workshop for the general public entitled Step into Courage. In addition, she has teaches Forsythe Improvisation Technologies throughout the United States. Helen is currently a Distinguished Visiting Artist at University of North Carolina School of the Arts.

Annabelle Lopez Ochoa – The Colombian-Belgian Annabelle Lopez Ochoa completed her dance education at the Royal Ballet School of Antwerp, Belgium. After a 12-year long career in various European dance companies Annabelle decided in 2003 to focus solely on choreography. In that same year she was hailed “rising star of the Dutch dance scene” (NRC newspaper) and only 7 years later the Temecula Performing Arts Examiner wrote, “Ochoa is truly a masterful choreographer with an edge for what dance can and should be in this constantly changing industry.”

Annabelle is an award-winning and sought-after choreographer who has created works for more than 40 dance companies around the world. In April 2012, she created her first full-length ballet A Streetcar Named Desire in collaboration with theater director Nancy Meckler for the Scottish Ballet. Streetcar was acclaimed by both press and public, and received several awards. It had an extended tour through the UK. The Scottish Ballet toured the piece in the States in the spring of 2015 and was invited again to the States in the spring of 2017. Since then she has been invited to create more narrative works such as Dangerous Liaisons for Grand Rapids Ballet and Broken Wings; the Life and Work of Frida Kahlo for English National Ballet.

The critically acclaimed piece Before After which Annabelle created for the Dutch National Ballet in 2002, and which is known as her signature piece, has been performed at the Dance Passion Festival in the Netherlands, the New York Fall for Dance Festival, the Houston Dance Salad Festival, the 2007 Orange County Fall for Dance Festival, throughout Sweden by the Gothenburg Ballet, at several galas in Spain and is currently on the repertoire of Ballet Nacional Dominicano, Whim W’Him, Ballet Hispanico, Finnish National Ballet, Dutch National Ballet and Pacific Northwest Ballet.

Young Soon Hue´s career as an international choreographer began with Elle Chánt, which was created on the Deutsche Oper am Rhein Düsseldorf in Germany in 2001.  Since then she has worked with companies in Europe and abroad, such as Tulsa Ballet in the United States; Queensland Ballet in Australia; National Ballet of Korea, Universal Ballet in Korea; Ankara Ballet, Istanbul Ballet, Izmir Ballet in Turkey; Deutsche Oper am Rhein Düsseldorf, Aalto Theater Essen, Theater Hagen, Mecklenburgisches Staatstheater Schwerin, Augsburg Ballet in Germany; and several other companies internationally.

Young Soon was invited to be an artistic director of the Korea World Star Dance Festival in both 2009 and 2010.  In 2013, she was invited to sit on the juries of the Korea International Ballet Competition and then the Seoul International Dance Competition in 2014.  Young Soon is now based in Düsseldorf, Germany and freelances as a guest master teacher for professional ballet companies, universities, and art schools throughout Europe, Japan and Korea.