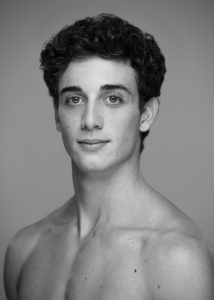 Gianluca Benedetti began his dance training at La Sylphide in his hometown San Felice Circeo, Italy. He then moved to Parma, Italy for the next five years to continue his ballet studies at Professione Danza Parma. In that time, he competed at the New York Finals of the Youth American Grand Prix, the International Competition Tanzolymp in Germany, the Prix de Lausanne in Switzerland, and he won the bronze medal at the XXI International Meeting of Academies for Ballet Teaching in Cuba. During those years, he also attended the Royal Ballet School Summer Intensive and the English National Ballet School Summer Intensive. In 2016, he joined the Houston Ballet Academy and continued to train alongside Houston Ballet II during his second year at the school. During that time he was given the opportunity to travel and work with the second company where he performed works by Stanton Welch AM and other various choreographers.