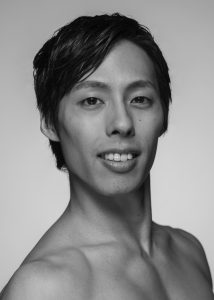 Shuhei Yoshida was born in Fukui, Japan. Following his training at the Hungarian Dance Academy (on scholarship), he joined the Bucharest National Opera in 2012 and was promoted to Soloist the following season and again to First Soloist a year later. Shuhei joined Tulsa Ballet in 2016. He was promoted to Demi-Soloist in 2017 and again to Soloist in 2019. His repertoire includes Basil in Don Quixote, Ali in Le Corsaire, the leading role in Theme and Variations (Balanchine), Beno and Pas de Trois in Swan Lake, Solor in La Bayadere, Puck in The Dream (Ashton), Trio in Concerto DSCH (Ratmansky), Petite Mort (Kylián), Classical Symphony (Possokhov), and Rassemblement (Duato), among others. He won first prize at the 22nd All Japan Ballet Competition.