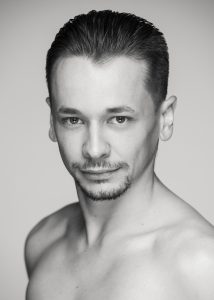 Rodrigo Hermesmeyer started his ballet training in his hometown, Joinville, Brazil, under the care of Marcos Sage. He then moved to Rio de Janeiro to continue his studies at Conservatório Brasileiro de Dança, while dancing simultaneously with Cia. Brasileira de Ballet, both of which were directed by Jorge Texeira.  Rodrigo also danced with Theatro Municipal do Rio de Janeiro.  Since joining Tulsa Ballet in 2010, Rodrigo has had the privilege of performing in John Cranko’s Onegin, dancing the role of Lensky, and the world premiere of Edwaard Liang’s Dorothy and the Prince of Oz, originating the role of Scarecrow. Rodrigo has also been featured in contemporary works such as Romeo (Cannito), A Million Kisses to My Skin (Dawson), Slice to Sharp (Elo), and Infra (McGregor).  He has created roles in original contemporary works by Ma Cong, Nicolo Fonte, Jodie Gates, Adam Hougland, Young Soon Hue, Ashley Page, and Dwight Rhoden.  In 2008, Rodrigo reached the finals of the prestigious Prix de Lausanne Competition.