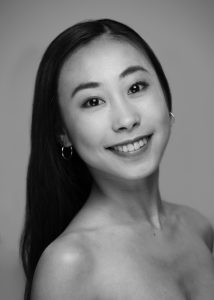 Aina Oki was born in Hiroshima, Japan. She trained at Koike Ballet Studio from 2003-2013. In 2013, she participated in the Youth America Grand Prix (New York Finals) and received a scholarship to the John Cranko Schule. She trained there until 2018 and performed roles such as the Blue Bird pas de deux from The Sleeping Beauty, The Naiad and the Fisherman (La fille mal gardee), The Four Seasons: Autumn (Adorisio), Sylvia Pas de deux (Balanchine). She performed in The Ballet Gala in Italy in 2015 and the Benefit Gala in Germany in 2018. She was a finalist at the Prix de Lausanne 2018. She joined TBII in 2018 and was promoted to Corps de Ballet member the following year.