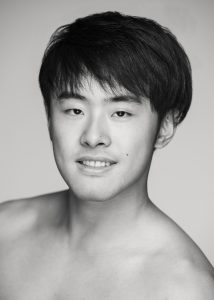 Born in Beijing, Chong Sun graduated from the Beijing Dance Academy and continued his training at the Kirov Academy of Ballet. After receiving 1st prize in the World Ballet Competition in 2010, he joined The Washington Ballet, where he rose to the rank of Soloist. While in D.C., Chong danced leading roles such as White Rabbit in Alice in Wonderland, the title role in Peter Pan, and Bluebird in The Sleeping Beauty, among others. In 2015, he joined Tulsa Ballet as a Demi-Soloist and has since added roles like Hortensio in The Taming of the Shrew (Cranko), Russian in The Nutcracker (Angelini), and the Lead Gypsy and Gamache in Don Quixote (Holmes) to his repertoire. He has also appeared in works by Annabelle Lopez Ochoa, Nacho Duato, Jiří Kylián, Alexander Ekman, Ma Cong, and Derek Deane.